today, I'd like to present four reservoirs by the Italian company Tecnofront.

The following reservoirs are part of this review:

This time's test system is made out of the following components:


In this setup, the Sanso provides a flow of max 275l/h with a reservoir by Magicool as a reference, which doesn't reduce flow at all.


Before starting, I'd like to state that I was very happy with the quality of the material and the build quality. The black and white Delrin, together with the tinted top, were flawless. Every hole was deburred: 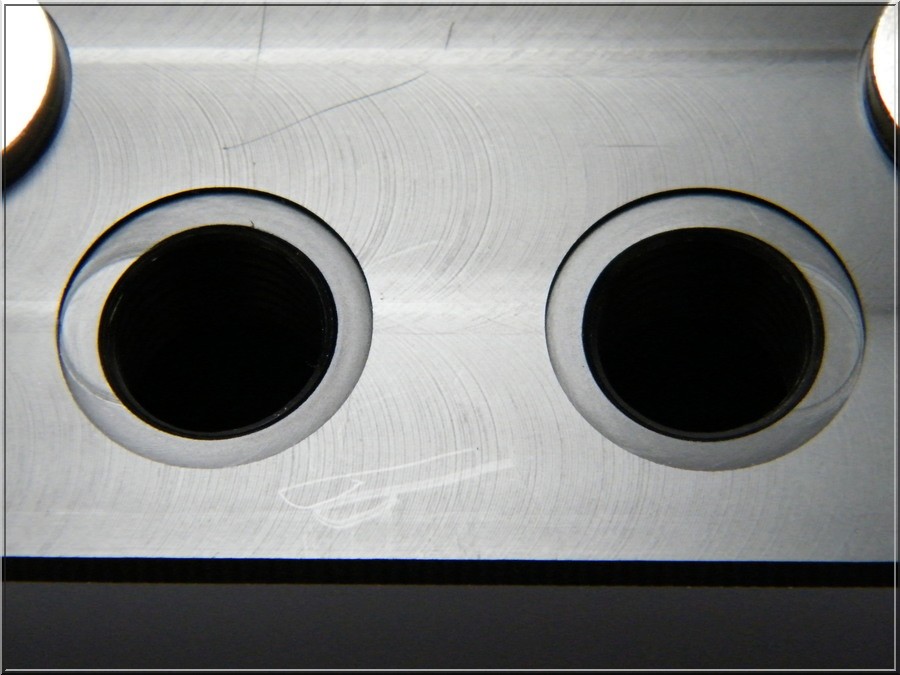 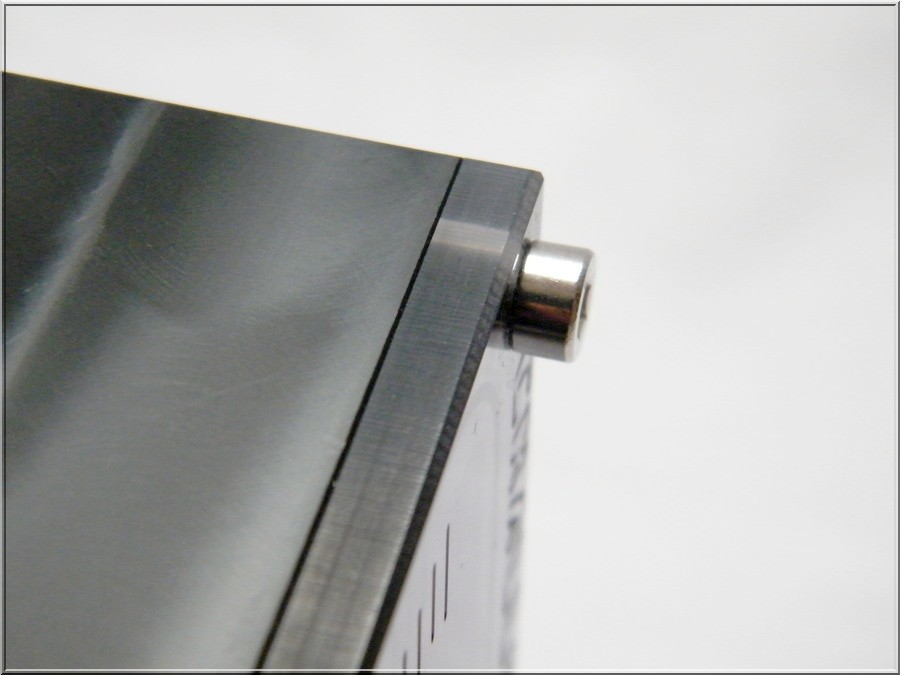 Even the holes in the Delrin didn't just get a thread cut into them, but had extra threads mounted inside of them, so that they're supposed to survive more than just cut threads: 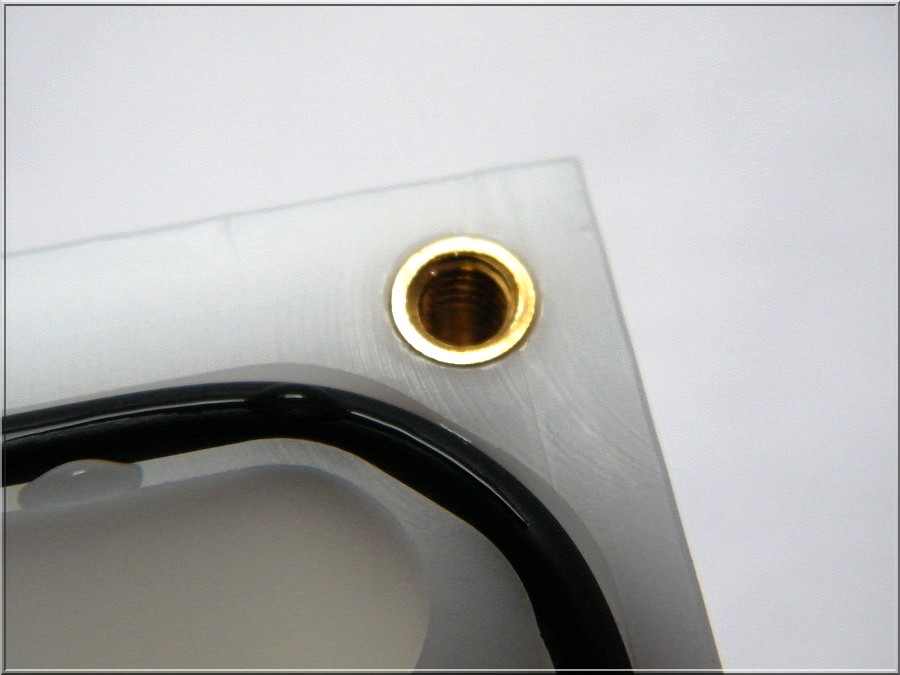 Another idea I really liked: the holes used for filling are set lower than the rest of the reservoir, so that it's harder to spill: 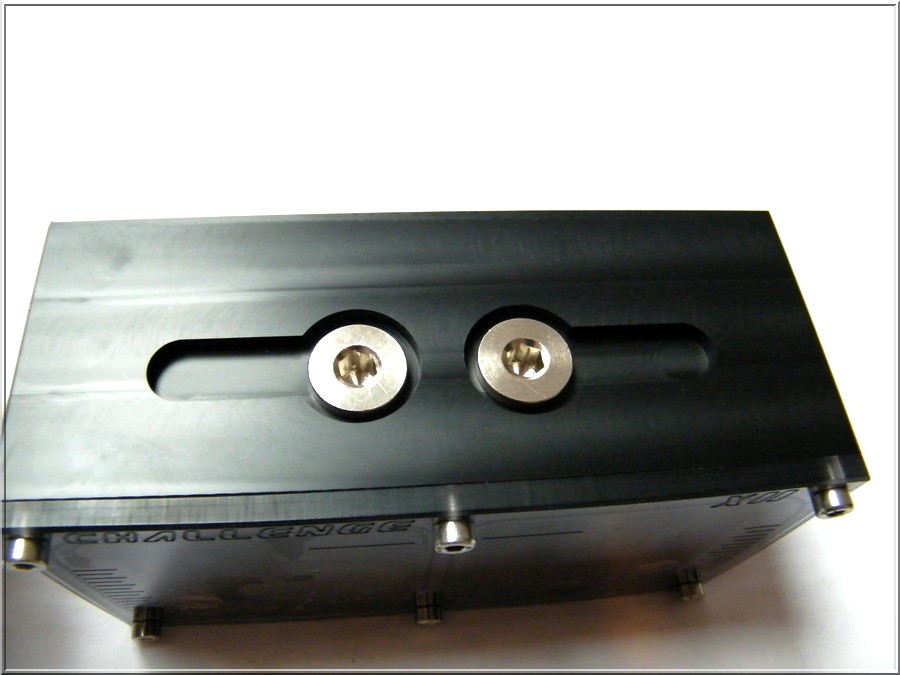 The reservoirs all came in the same, ecologically meaningful, two-part simple cardboard box: 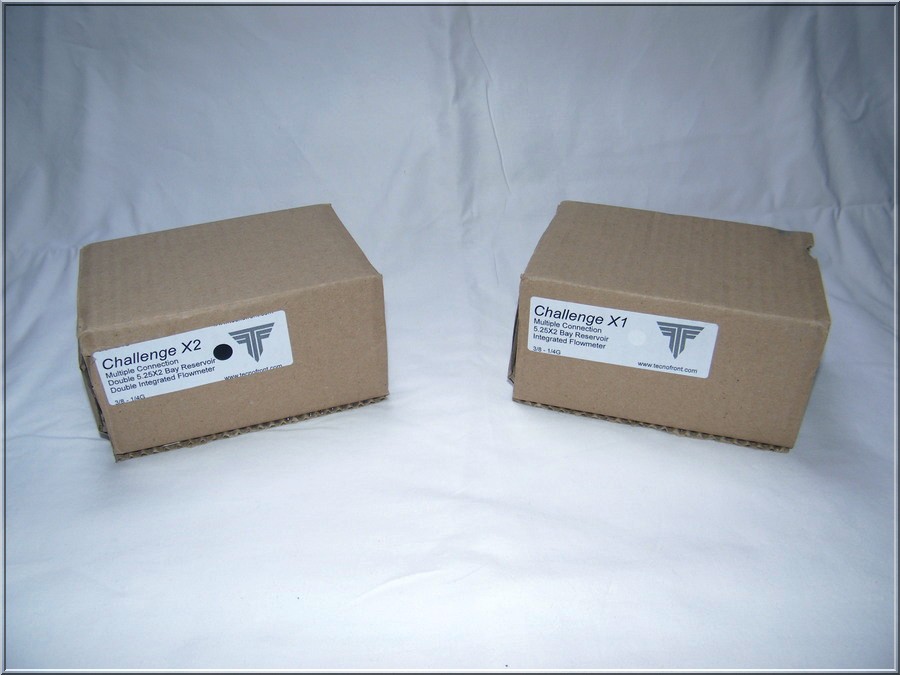 The scope of delivery includes a set to mount the reservoir in the case and two barbed fittings (the Challenge X2 comes with 4), made out of plastic and remind me of the popular Perfect Seal-fittings: 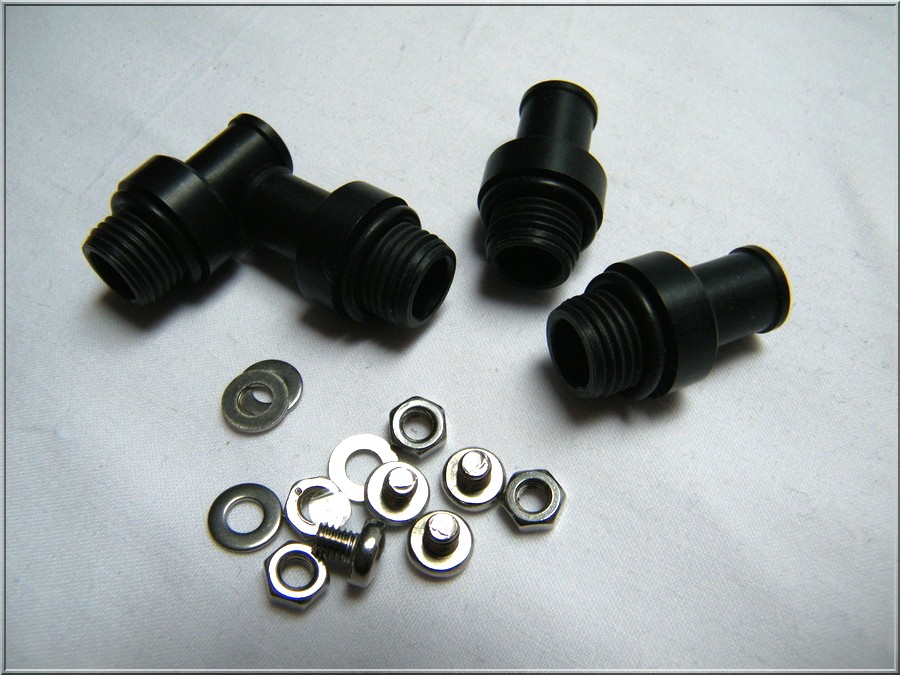 -can be mounted in three different sizes of holes: 3, 5 and 7mm diameter
-scope of delivery: 2 barbed fittings for tubing with 10mm inner diameter, mounting material 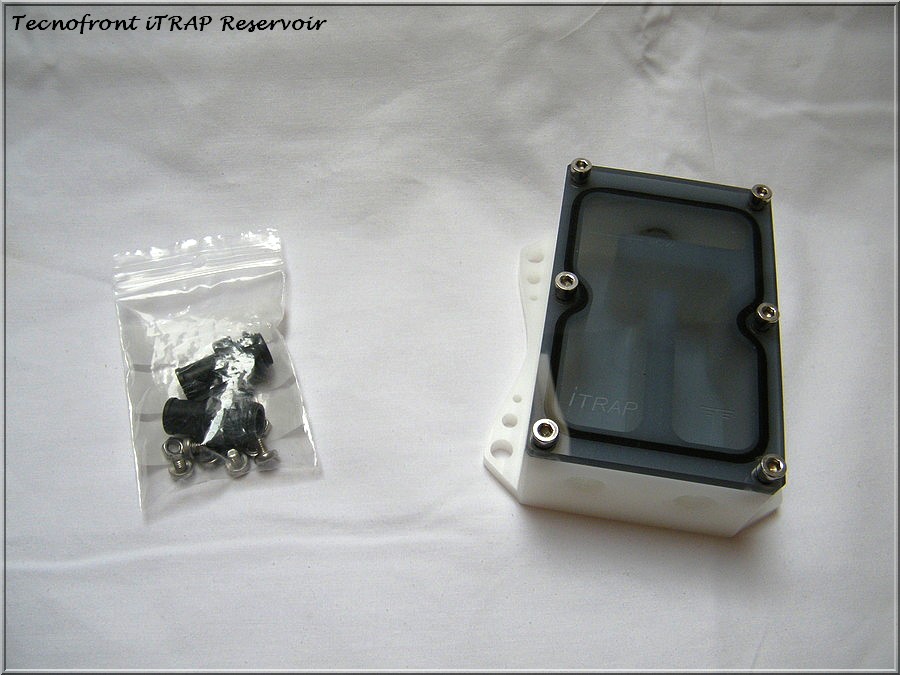 A simple, yet clever system is supposed to help the reservoir to get rid of the air in the loop quickly and without problems. A water level shown on the front has to be maintained for this, but let's just get some impressions for illustration: 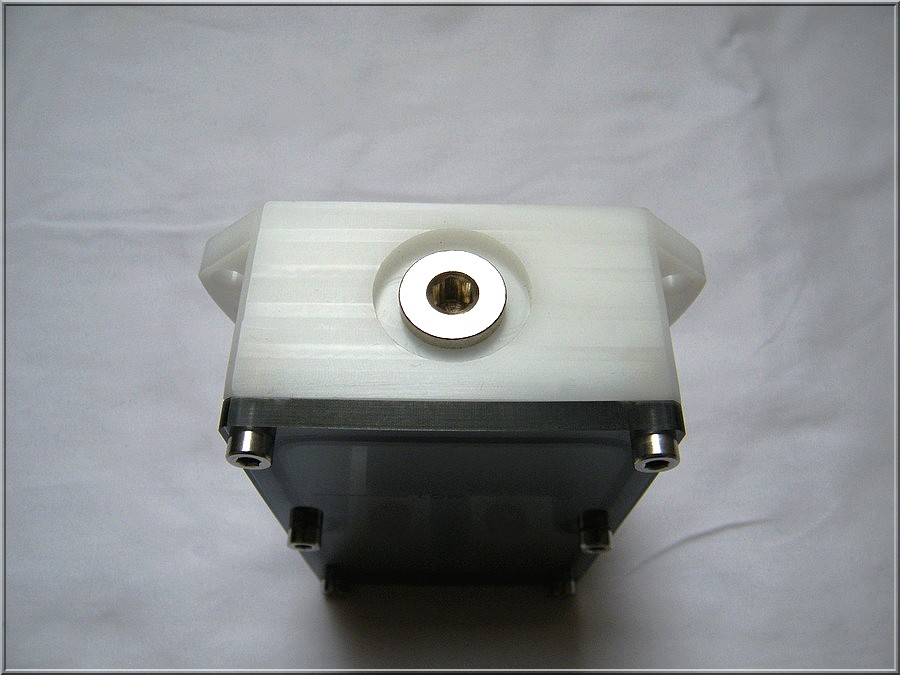 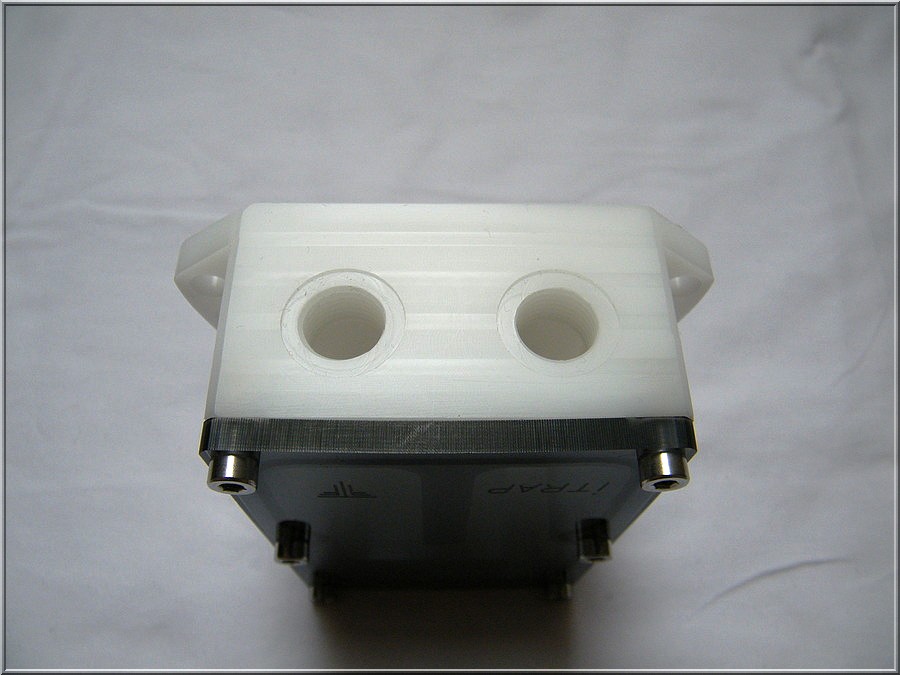 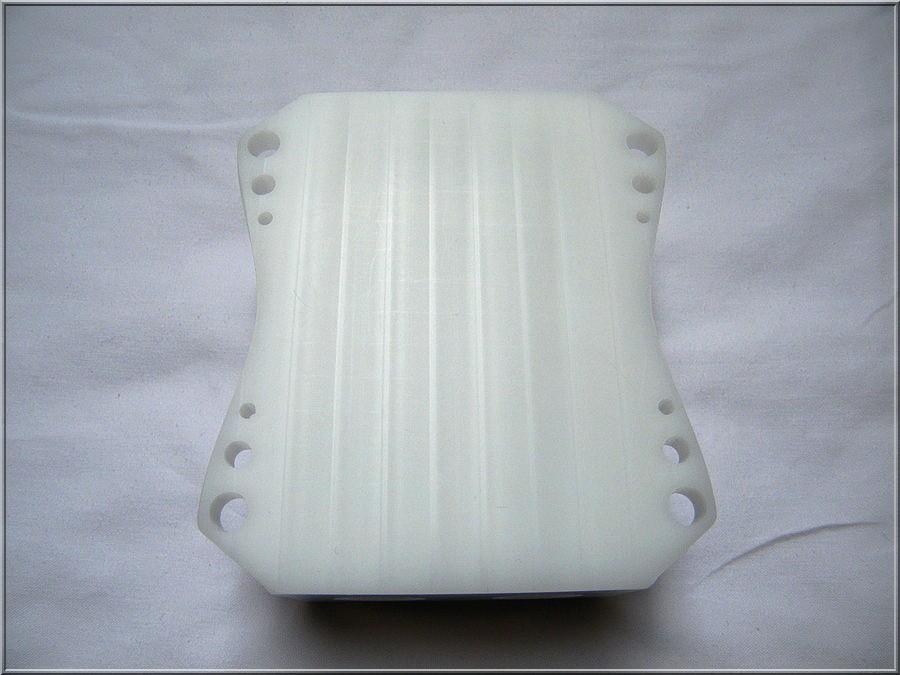 The top opening is used to fill the reservoir. You can also use a lighting module instead of the sealing cap after filling to create some nice effects.
Even though the reservoir is comparably small, it was quickly able to get all the air out of the system, even providing better flow, which got to 278l/h.

Here's a little action video of the Tecnofront iTrap in action:

This reservoir focuses on a metal float acting as a visual flowmeter.
Even though I was scared that the Sanso would be to much for this float, making it just stick to the top all the time, this didn't happen because of the clever manufacturer: the float's channel gets more open to the top, so that even high flow rates will be visible correctly.
It's hard to get this in photo, but maybe it's visible (the red line shows the channel getting larger to the back, the green line the way of the float): 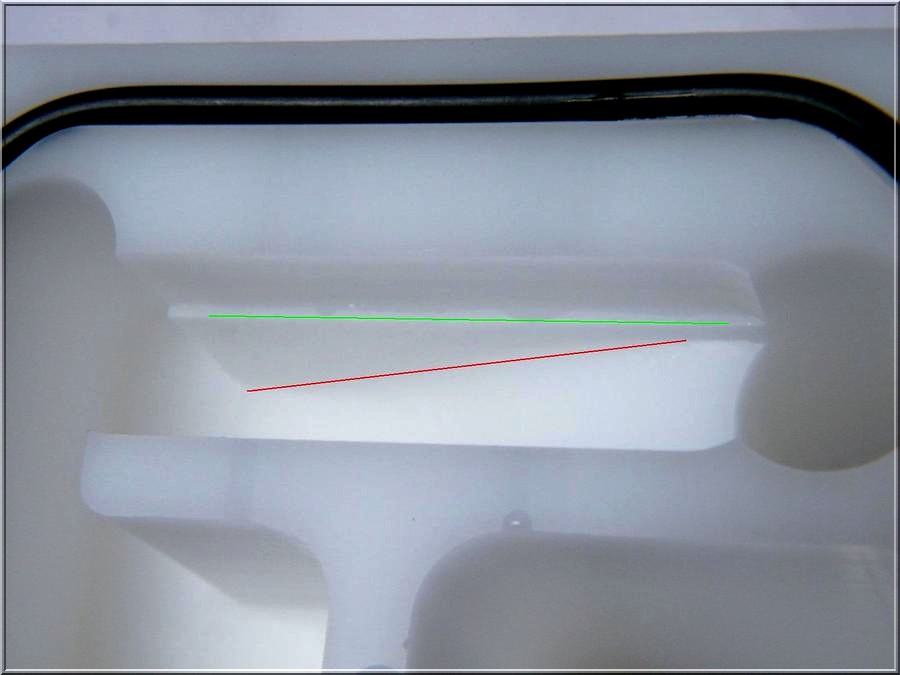 As it was with the other reservoir, the water-level shouldn't get lower than a special level to keep the loop free of air bubbles.
And this is the moment where it stops being all good: This reservoir can't cope with the Sanso's power, so that the loop doesn't get free of air.
If a Highflow-fan wants to use this reservoir, he'll have to slow the flow down or buy another reservoir.
Still, this reservoir barely slows down the flow itself: over 270l/h were achieved.
Of course, it'll work fine with flows lower than mine.
Some pictures: 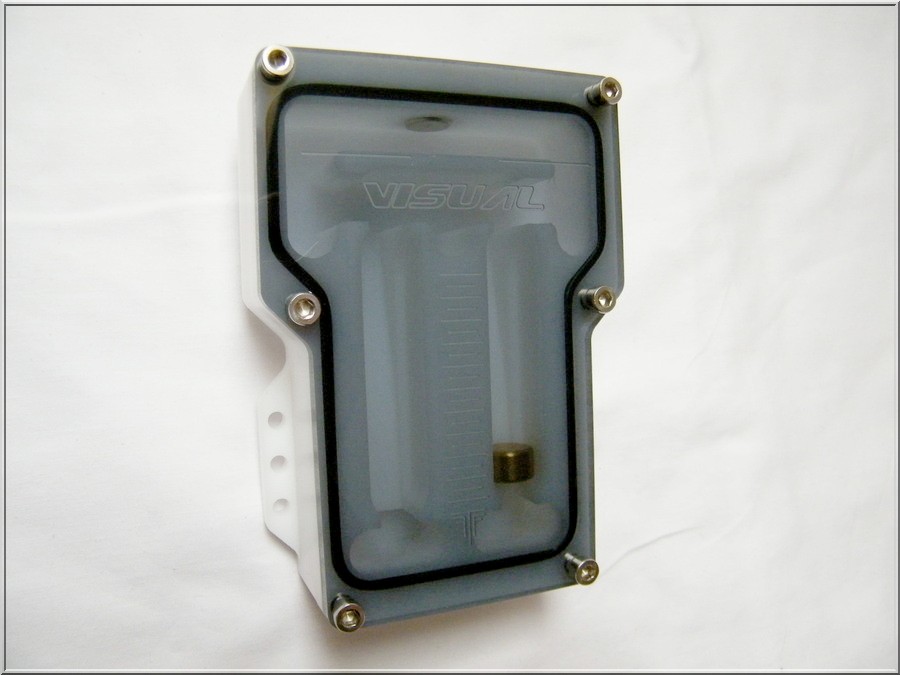 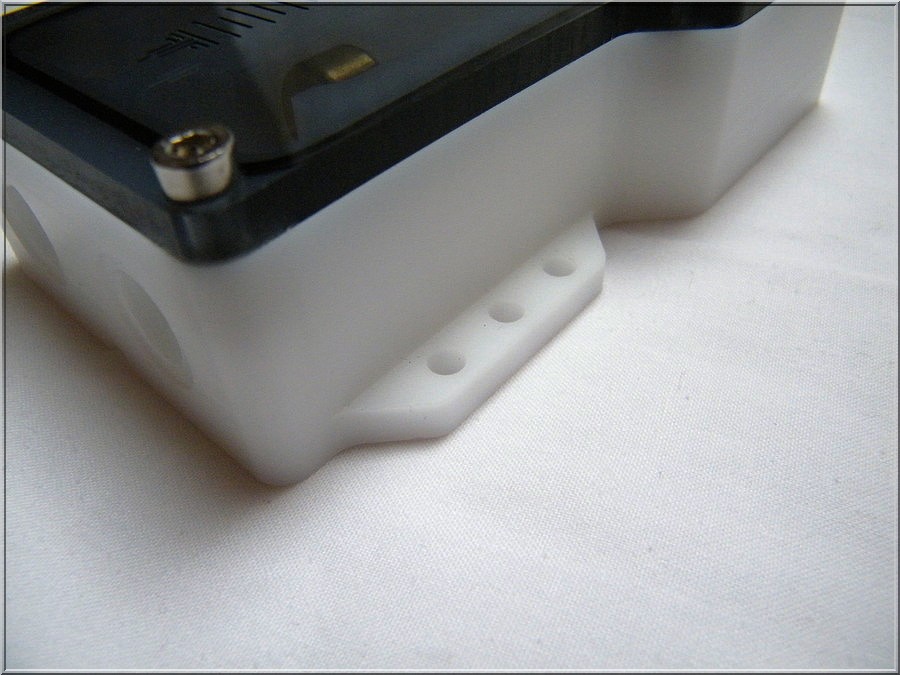 As an added bonus, this reservoir also features a hole for a 5mm LED and a special slot for the cable: 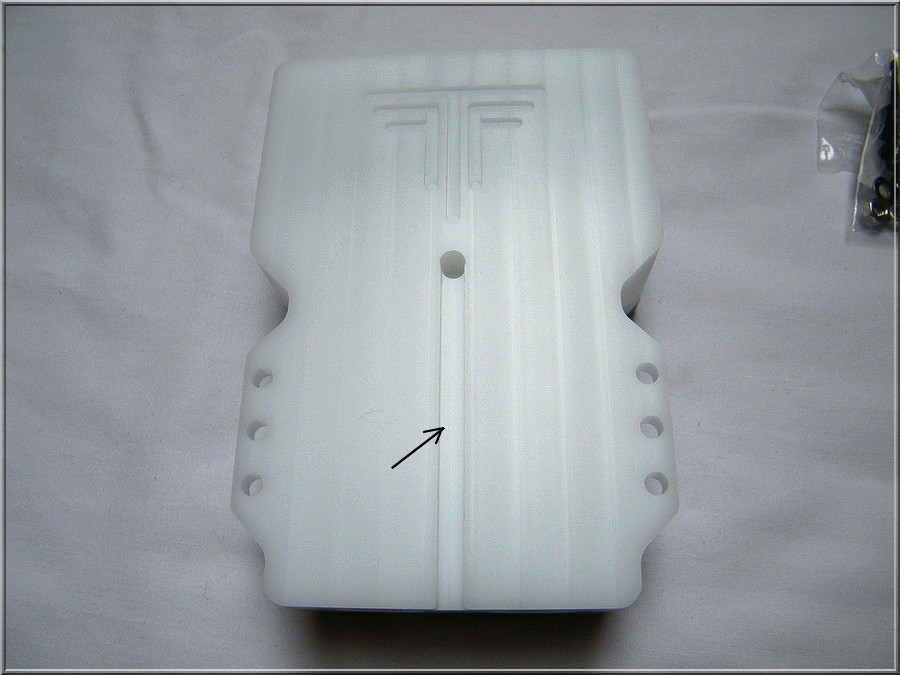 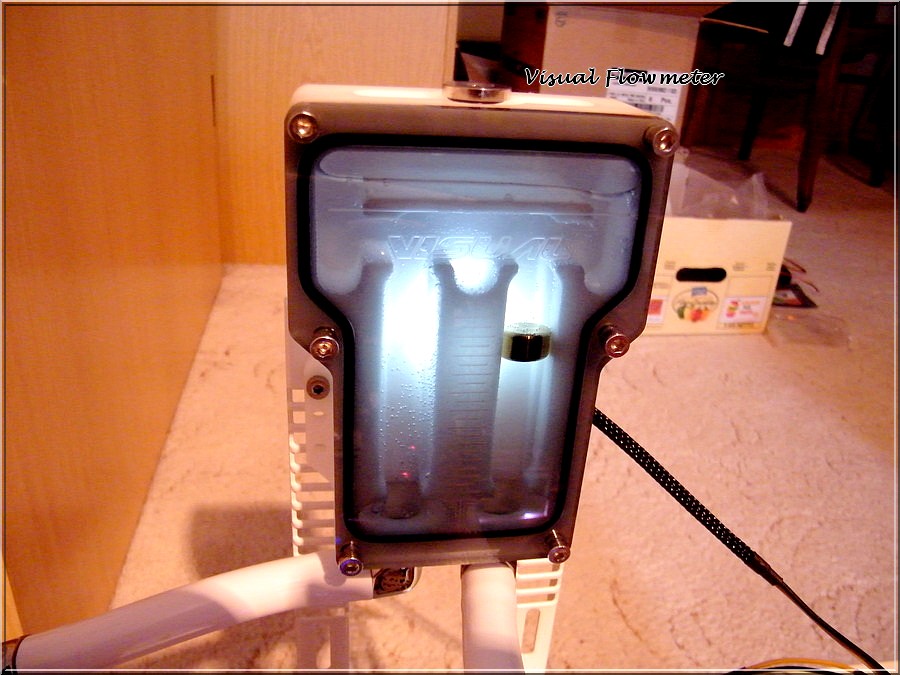 There's also a video to the Visual Flowmeter:


3.) and 4.) Last but not least there are the two last and newest candidates: the Challenge X1 and X2 for a maximum of two separate loops for two 5.25" slots each.
They also feature the flow indicator already seen on the Visual Flowmeter.
While the X1 is made for one loop, the X2 is designed for two, helping users who want to have separate loops for CPU+Board and VGA-cards, for example, while also showing the water levels of both loops at the same time. As the reservoirs are the same apart from this fact, I'll deal with both at the same time: 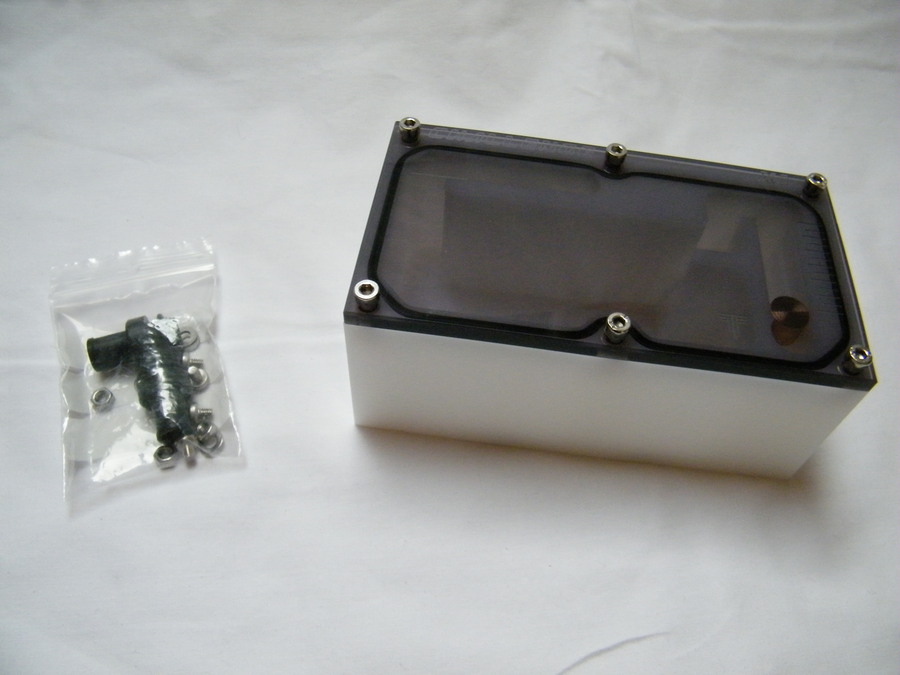 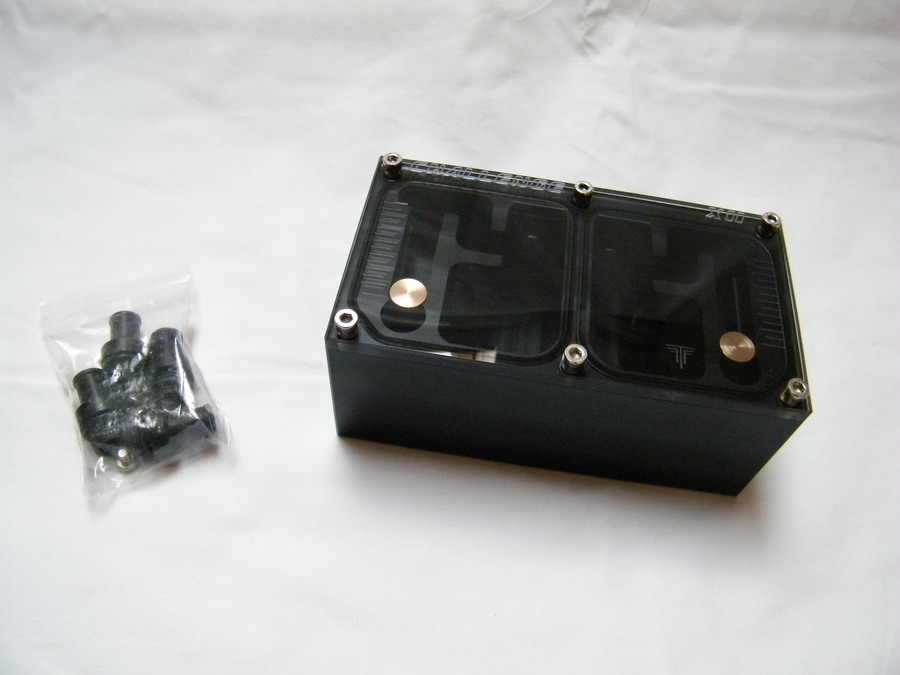 Mounting these reservoirs is pretty clever: in the side, there are little holes for the included nuts, in which they can be placed: 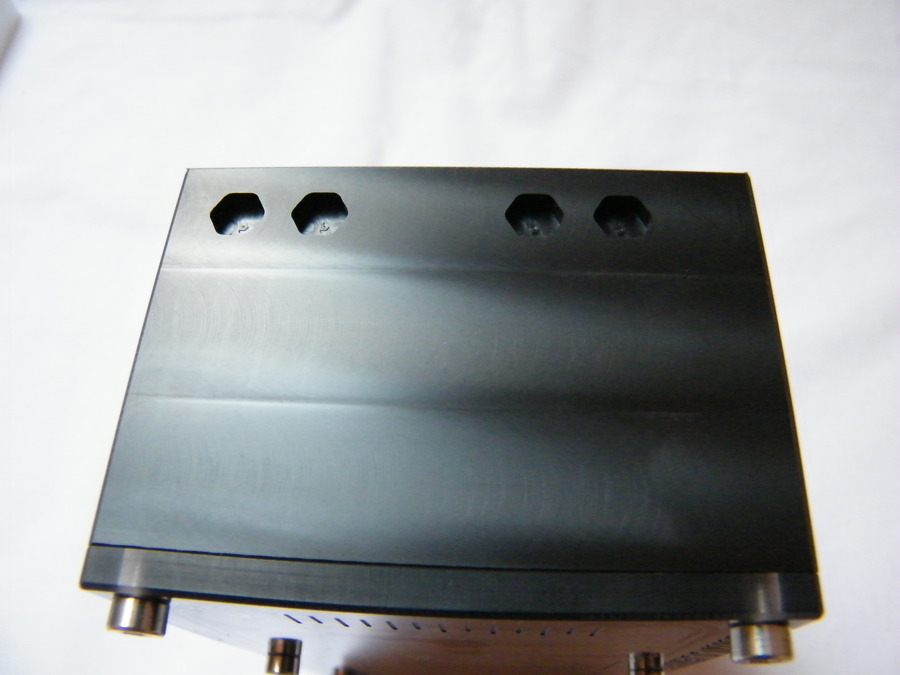 As my benchtable didn't offer a possibility for this mounting mechanism at the time of testing, I fitted longer tubing to the reservoirs and just put them on the table.
Even though I wasn't sure if the reservoirs would be able to get all the air out of the system, what the Visual Flowmeter couldn't achieve, I was pleasantly surprised:
Using the slightly different, more open structure, both reservoirs were able get suck all the air out of the loop featuring the powerful Sanso pump.

And, once again, a few impressions for you: 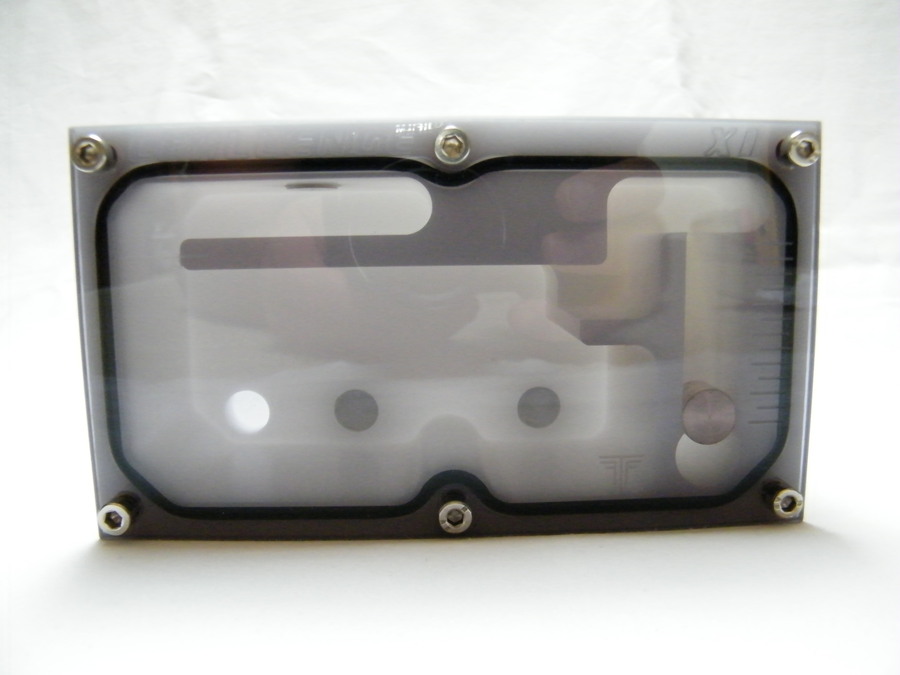 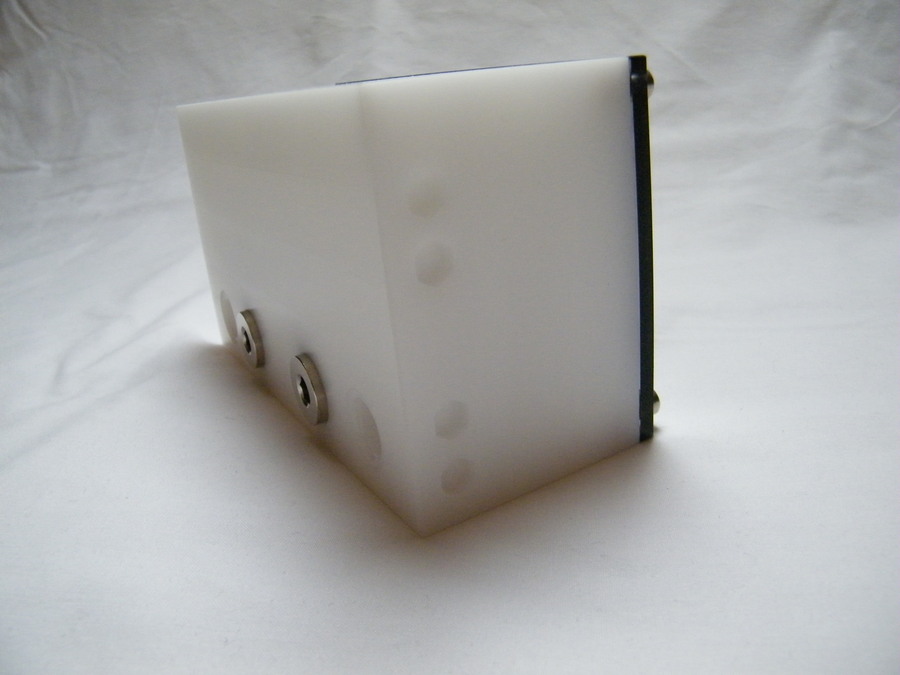 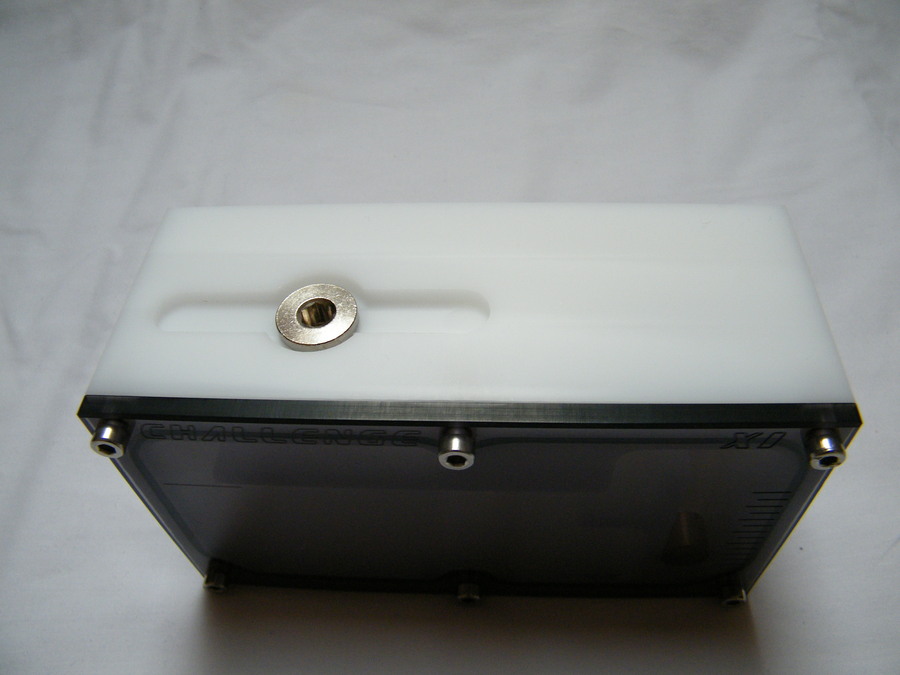 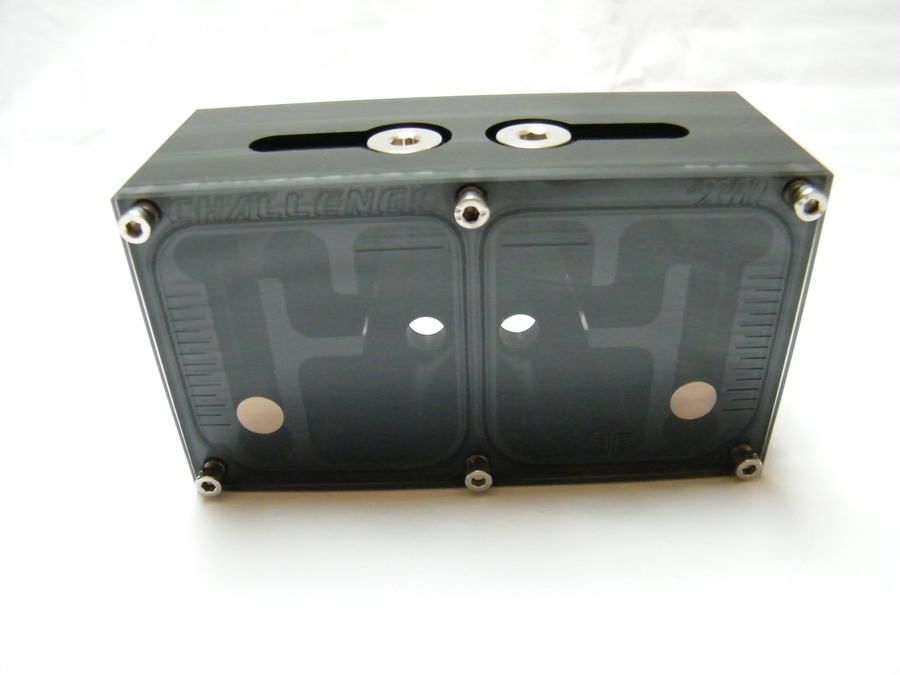 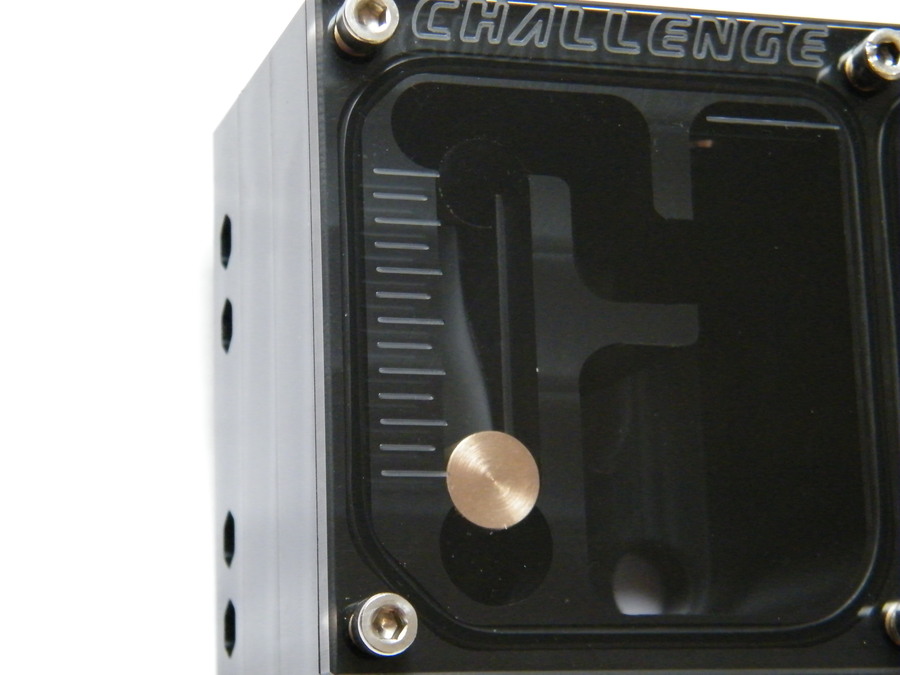 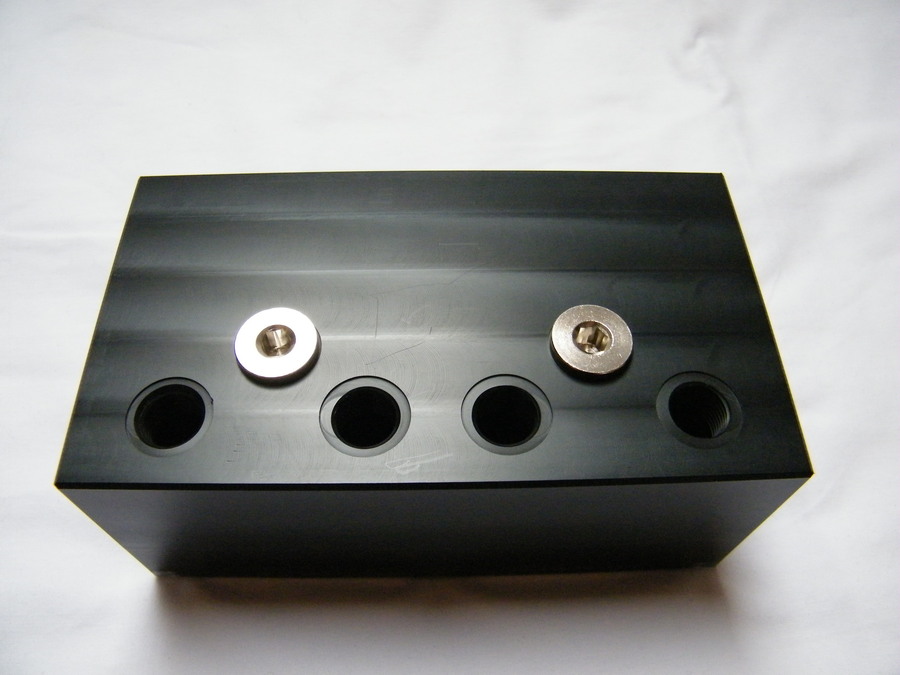 And a few more of the reservoirs in action: 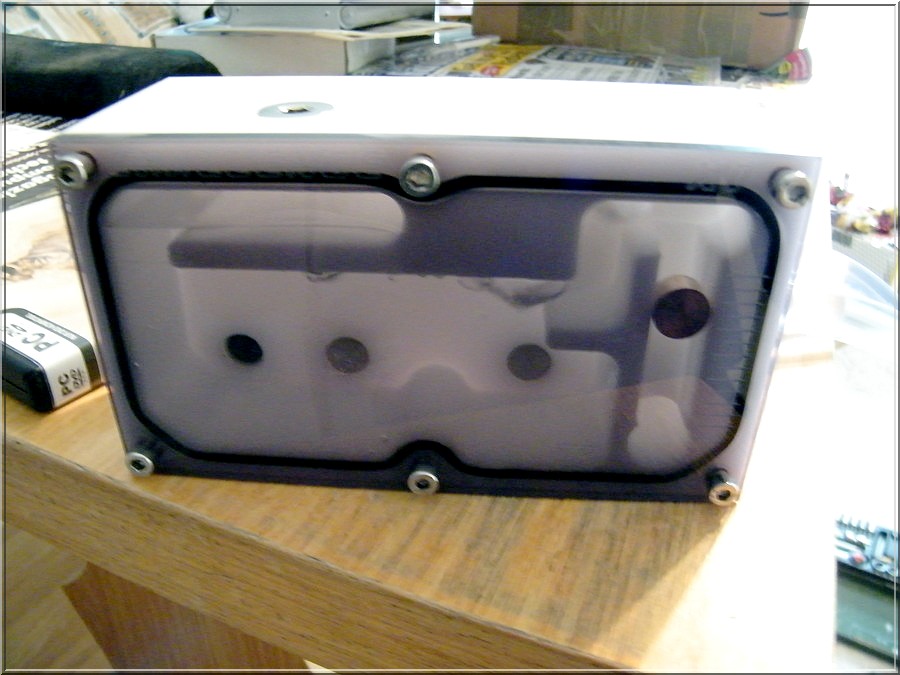 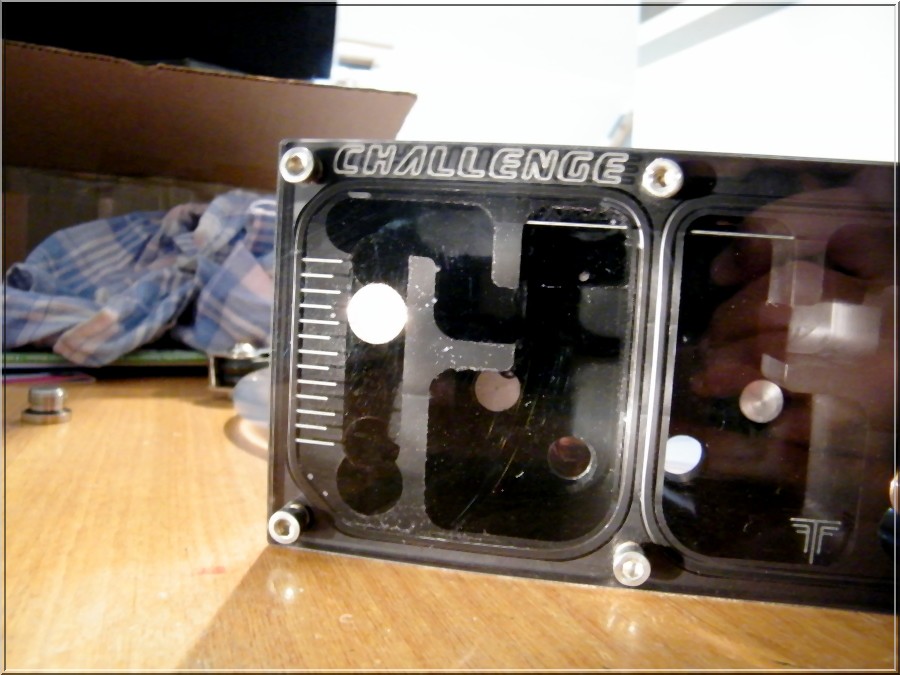 And, of course, another two videos, starting with the Challenge X1

And we mustn't forget the Challenge X2:


When it comes to flow rates, these two newcomers are pretty much the same as their colleagues - both reservoirs could offer a flow of 273l/h max.

The company Tecnofront succeeded in creating both optically and technically appealing reservoirs, that don't have to hide from their strong rivals.
They offer pretty much everything and the prices are very acceptable for this kind of quality.


Concluding, here are all of the reservoirs in a pictured overview:

Special thanks go out to Marco from Tecnofront.com for offering me these samples.
Also, I'd like to thank my assistant sonnyboy, who assisted me with this review!

Again, great! really love your reviews and your other stuff! What is your photo setup, like the camera and lighting stuff?

Well, mostly i use a canon ixus 70, with a NoName Tripod from Ebay and sometimes Alu and Plastic backgrounds for product photos...that´s all
S

I Love my NUC

Bummer i bought a EK dual loop, dual bay res with those nasty impellers in the front (black impellers aren't available ). Otherwise, the X2 would be just perfect.
L

Yeaah, one of 15 Forums, where the Review is online
Vergelijkbare onderwerpen