Hello, and welcome to my first guide.

In this guide I want to help you a bit in the selection of the correct size radiator.
It is the biggest test I've done so far.

Many of us are in range of suitable radiators not sure.
The possibilities of installation in many cases are quite limited.
So often the question arises of how powerful a radiator must be in order to cool my system.
The mass of different radiator sizes, it is easy to make radical error, and equip their system with undersized radiators.
The possibility that money is useless to throw out the window of course given in the form of too much radiator area.
Of course the second option is the lesser evil, but it would be better to invest the money elsewhere.

So, how big a radiator do?

I've asked this question of course frequently, so I got the idea to make a very big guide about the performance of the radiators in various sizes.
For this guide I were a total of nine radiators available, would be in the detail:

Given the enormous range of different manufacturers and radiators, I have decided
to make all tests with the manufacturer Phobya radiators. Especially since this shall carry out any relevant variables in its range,
and you get a good impression of the scalability of a series.

This guide is designed in three basic different sections.

To a throttled with default settings for the processor and GPU, going strong with overclocked processor, at a quite high voltage and ultimate benefit, with OC and fans.

One of the requirements of this guideline was that no component can reach 80 degrees. However, should it happen, the test is aborted and not classified as passed,
since the sense of a water cooling system would be a mistake now complete.

The purpose of a water cooling system is, in my eyes to keep the components as much as possible to cool and the low background noise.
Therefore, the test run with fans throttled.

For this guide I've used quite a common system with base 1156, it asks a good compromise between power and heat generation.
The newer socket 1155 system, as regards the heat, much less problematic
if you do not play with all high voltages.
And the base 1366 in this review, in turn, would exclude virtually all smaller radiators from the outset,
that the system produces much more heat.


The test system in detail:


Flow rates on individual radiators I have deliberately avoided that in this combination
more than 150 Radiator Lph no matter what was on the line.

Water temperature was measured in degrees Celsius with a tolerance of 1 ° sensors.

Would be tested with Prime95 and rthdribl.exe.

Idle does not mean that the system is not used in front of him is special, it is for mail, surfing YouTube, etc. used.

The values ​​of the three sensors I've summarized and represented an average temperature in diagrams.

Here are the values: 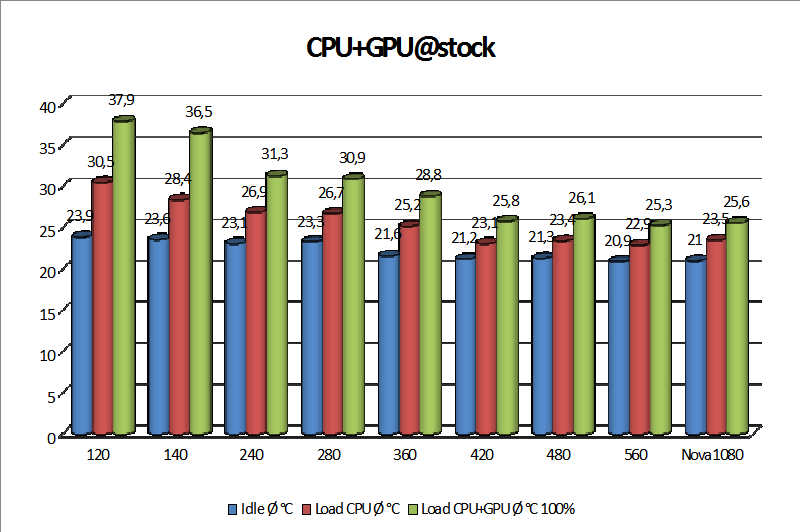 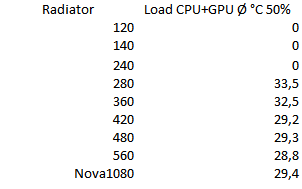 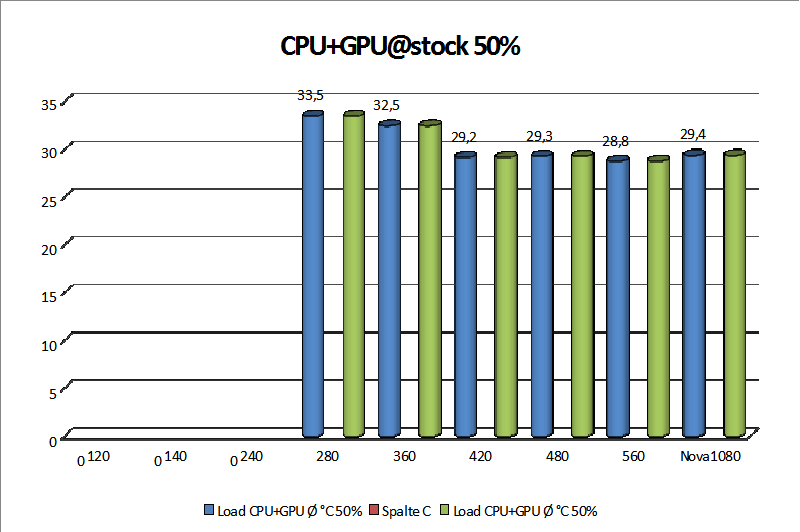 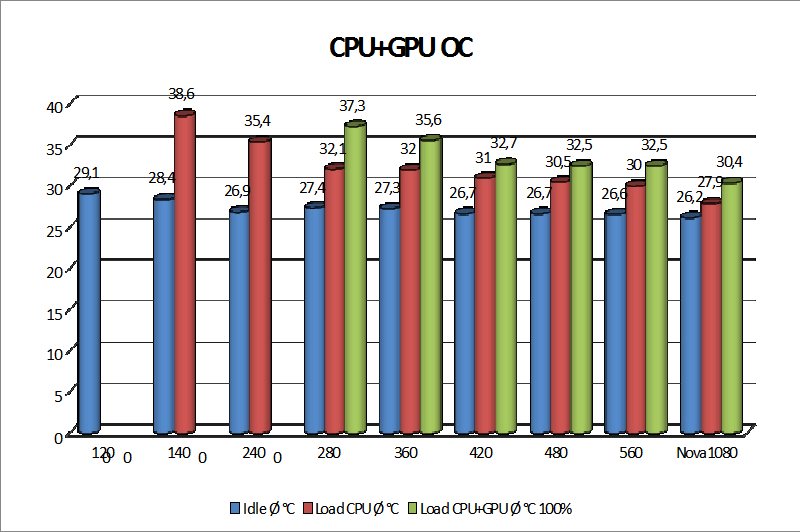 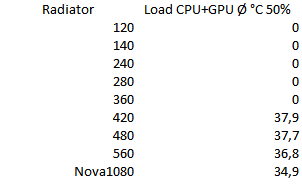 One must still bear in mind that these tests at one, rather low room temperature have been carried out.

To be precise, the temperatures were as follows:

The fan speeds were as follows:

When overclocked system, things are even worse.
Since the values ​​are still acceptable even at idle, but that's changing, just as soon as the CPU is stressed.
If then there are the graphics card are claimed missing out gradually more radiators.


Only from the radiator 280, it is possible to cool the system enough.
Probably noticed with fan at 100% which is not very silent except for the Nova 180 with their fans, which are also at 100% yet pleasantly quiet.


If we reduce this still the speed is so slow very closely.
The test system is cooled only by four of the nine radiators sufficient.


And I saw quite a big surprise.
The 360 ​​is not able to cool the system and the mind at a room temperature of more than 25 °.
What comes next in the summer, when increases in some under the roof at room temperature over 30 °?
I am aware of the very few games that generate simulated load in real mode games,
but you should really, the room temperature can not ignore.


My conclusion, for this system, mind you , clearly missing here.
At least a 420 radiator or if space is not allowed in the housing, a 360-plus 120/140er radiators radiator is the minimum
what you need. You want an SLI / CF or maybe even cool with another component, one should consider the possibility of an external radiator installation into consideration.
Here's the radiator or Nova1080 Mora, with the possibility of installation of 180mm fans, a perfect and above all easy to implement alternative to the internal installation.
One must also realize my conclusion in relation to my system.
In systems, especially not overclocked, things look quite different.
Sufficient for this purpose, completely out of control in a 360 radiator to cool the system effectively and quietly.
Again, in a heavily overclocked so.1366 system with two or more graphics cards, I would definitely fall into a similar Nova1080 or radiator.

I hope this guide can help you a bit further and am of course open to ask the community to provide.


declaration to influence the flow of the cooling power:


There was in this comparison, the flow at all radiators over 150 liters per hour, the flow rate played no role.
However, with more restrictive coolers and weaker pump varies, of course, the influence of flow on the cooling performance.
In general, a flow is viewed by more than 60 liters per hour than the optimum. Bring a further increase in temperature usually no bigger profits with them.


For assistance with this guide, I would like to thank the following companies: Alphacool and Phobya thank you very much.
My thanks goes to the company: Asus Corsair PowerColor and be-quite! for their support.
Vergelijkbare onderwerpen