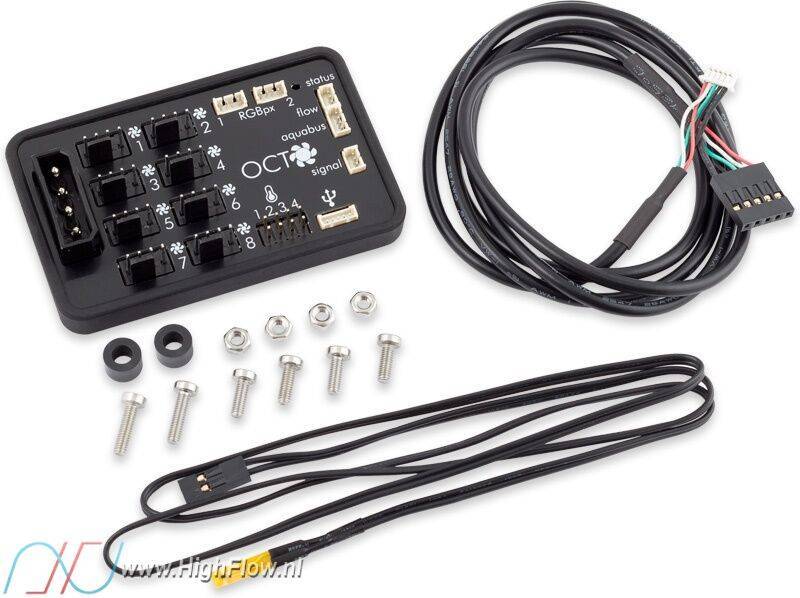 The OCTO made by Aqua Computer is an eight channel PWM fan controller with outstanding functionality, equally suited for water cooled or air cooled computers. Additionally, it features an RGBpx effect controller for 180 addressable LEDs.

Key features of the OCTO include:
· Programmable eight channel fan controller
· All fan outputs supply up to 25 Watt of power per channel and include speed monitoring (max. 100 W combined)
· All fan outputs with 4-Pin connector and PWM controlled
· All fan outputs can be switched off completely
· Versatile control options
· Four temperature sensor inputs
· Sixteen further values can be transferred from the PC to the OCTO using the aquasuite software
· Flow sensor input
· Two RGBpx LED outputs for LED strips and fans with individually controllable LEDs
· USB 2.0 interface
· aquasuite software for a comfortable setup, evaluation and visualization of all sensor data
· aquabus interface: When connected to an aquaero, the fan outputs can be controlled by the aquaero

Fan controller
The eight fan channels of the OCTO can be configured independently, the high maximum power output of 25 watts per channel (maximum combined power 100 watts) allows for connecting multiple fans to each output of the OCTO using suitable splitters. In addition to setting fan speed manually, fan speed can also be controlled by temperature. In temperature controlled mode, set point controllers as well as curve controllers are available. If the corresponding temperature falls below the set limit, connected fans can either be switched off or be kept running at an adjustable minimum speed. For secure fan start-up, an intelligent start boost with speed signal monitoring can be configured for each fan channel.
All fan outputs are compatible to PWM fans with four pin connectors only and feature overload protection.

RGBpx controller for addressable LEDs
The OCTO controller is equipped with two RGBpx outputs for controlling up to 90 addressable LEDs each. Color and brightness can be individually controlled for each LED. In total, up to six groups of LEDs of varying size can be configured for each output, and visual effects can be assigned to each group. The 23 available effects can be extensively adjusted for further customization. Many effects can also be configured to modify effect parameters (for example speed) depending on current sensor data. The available effects also include sound-to-light effects, visualizing computer sound output. The AMBIENTpx effect deserves special notice, replicating the border area of the current monitor display on connected LEDs, allowing for an impressive background lighting surrounding the monitor.
Alternatively to the LED strips offered by Aqua Computer, LED fans made by Corsair and NZXT can be connected using the optional accessory RGBpx Splitty4 (item code 53267, not included in delivery).


OCTO can be used as an aquabus expansion device
Besides being a fully autonomous USB fan controller, the OCTO can also be used as an aquabus extension to an aquaero 5 or aquaero 6. In this configuration, the eight fan channels of the OCTO can be controlled by the aquaero, temperature sensor inputs and flow sensor input are transmitted to the aquaero.

Notes on the AMBIENTpx effect
Screen content preventing analysis by DRM or similar methods cannot be utilized for the effect. 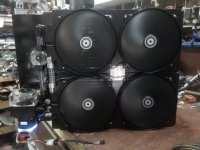 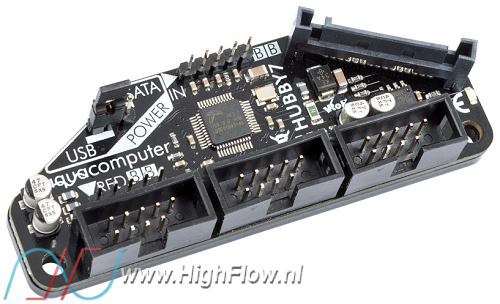